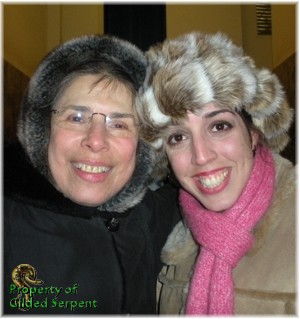 “New York City in JANUARY – are you crazy!?” my husband asked me when I told him of my brilliant plan to expand my knowledge of folk dance by attending Morocco’s 2010 Winter Intensive, “it’s COLD!” Nevertheless, January 7th he was on the plane right next to me on our way north.

Morocco’s Winter Intensive is one of two semi-annual events she holds in her studio in New York City. The workshop covered both modern and traditional Moroccan Schikhatt, Tunisian dance and an overview of the Zar and Guedra rituals. The workshops were from 9:30 a.m. – 3:30 p.m. every day with most of the time devoted to learning choreography and the rest being more lecture based.

Once everyone found their way to Morocco’s Manhattan studio on Friday morning, Karen – one of Morocco’s students and instructors – began the warm up. Usually I’m not a fan of workshops with long warm-ups, but I appreciated it in this situation because (a) it was cold outside and (b) the workshop was five hours long so an extended warm-up was hardly cutting into learning time. It was also designed in such a way that we reviewed technique we would need for the day’s choreographies and in the subsequent days, reviewed what we had learned in the days before.

Schikhatt (a Moroccan word meaning "wise woman") is a dance performed before weddings at bridal parties as a way to "educate" the bride in the movements she would be expected to mimic on the wedding night.

The dance involves the pelvic region more than Oriental or Raqs Sharqui styles and is typically in a loose caftan with something tied around the hips. Household items like handkerchiefs and long scarves may be used as well when dancing schikhatt socially at parties or with friends.

Sunday we learned a Tunisian piece and we spent Monday going over the Guedra and Zar rituals as well as just chatting with Rocky (Morocco’s nickname) about the material we’d covered, reviewing steps, and watching a few more videos.

Tunisian style dancing is often performed on the balls of the feet and involves many twisting movements of the hips and more earthy than the oriental styles and also performed in a caftan and not a two piece costume.

The Zar is not a dance style at all, it is a ritual! It is technically prohibited by Islam and so Zar practitioners are becoming less common and harder to find although they still exist. The ritual is designed to cleanse the soul of bad spirits. The ritual is led by a singer and one or two percussionists who play a steady rhythm. There is no wild hair tossing in the zar as there is no specific "movement" that corresponds to the Zar as it is a ritual and not a performance dance, although many dancers do present stage versions of the ritual.

The Guedra ritual comes from the Blue People of the Tuareg Berbers from present-day Morocco. Both men and women can participate in the guedra ritual, but the main person (the Guedra) can only be female. A drum is played and everyone involved claps and chants along.

The purpose of the Guedra ritual, and what makes it unique, is that it is simply designed as a way to share love, light and good energy with all present.

Each participant was provided with a copy of the music, choreography notes and cultural articles about the dances, which I appreciated as I could spend the workshop time focusing on learning rather than madly scribbling notes I may or may not be able to decipher later. This is a practice that seems to be growing in popularity among workshop instructors and I hope it continues.

While only a brief overview of the different topics covered, the Intensive covered what one would expect a workshop would do – provide education in a particular topic or set of topics, giving the attendees additional knowledge in said subjects they can either incorporate into their own dance or not. While these topics are not necessarily something I would expect to add into a restaurant set or what I would perform at a party, I went to the event with no prior knowledge of Schikhatt or Tunisian dance. Since this dance is more than just a set of movements and we need to, as performers, understand a bit of the culture from which our dance originates, I did finish the intensive feeling a bit more educated about the various styles and am more likely to seek further instruction when a dancer who teaches about these styles is in the area.

Magnolias performing the modern Schikhatt at a local festival (it was WINDY!)