We Will Rak You 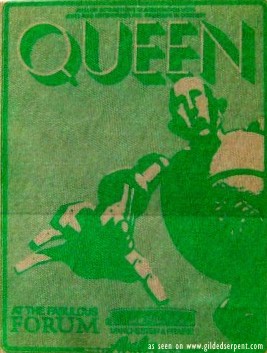 My Dance Experience with Queen

I’ll admit I wasn’t too familiar with the music of the British rock group Queen.  The year was 1977, the month of December, in Los Angeles.  I was invited to perform at a dinner party where Queen, in Los Angeles for several concerts, was the guest of honor.  The job came to me through Dianne Webber: my teacher since 1974 and the director of the dance company I performed with, the Perfumes of Araby.

The Perfumes repertoire included specialties like candle dance, snake and sword dances as well as folk dances of North Africa, Turkey, Armenia, Syria and Lebanon, with a cabaret style solo dance at the end (from late 1977 through ‘79, that was me).  This job offer was for a six girl dance team including myself , Jane Padgett and Denise Russo. 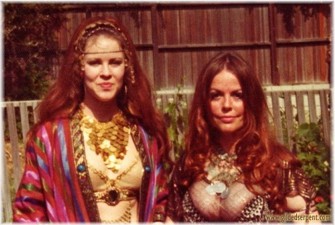 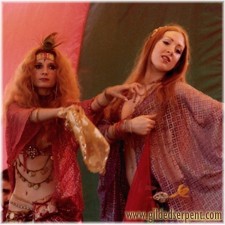 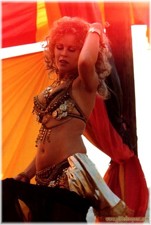 Dianne encouraged Jane, one of our snake dancers, in this: her first private party booking experience.  Jane selected the Armenian folk dance Sebastia Var, a Turkish 9/8, a Lebanese Debke, a snake dance, and my solo.  One of Jane’s recollections of the musicians is charmingly hilarious:

"I hired Arshag (Chookoorian, drums) and Jeff (Hovsepian, oud) from Haji Babas (Armenian Restaurant Los Angeles, CA).  …I had a problem because I was doing a snake dance in that show, and Jeff is scared of snakes!  I had to beg him to do that show for us! And he made me promise to tip him off before that number, so he could turn his head away during that song and not look at the snake!  He did turn away and look backstage the entire time I was on with the snake.  But I spent the entire dance trying to get Jeff to look, without anybody in the audience realizing what I was doing!  I remember that Arshag was trying not to laugh!"

Although I don’t remember the venue location, I do remember the spacious banquet room: it had a dark wood bar on the far side and over by the dining tables it even featured a small raised stage that we happily used.  After the performance as I was getting a drink of water at the bar, one of the British guests left the group and approached me to chat.  As we exchanged pleasantries, I remarked that the party was for the rock group Queen.  Smiling, he pointed out several of the guests: “Well that’s the singer, and that guy’s the bass player.  The tall guy’s the guitar player – and I’m the drummer!”  (Freddie Mercury, John Deacon, Brian May, and Roger Taylor)

An invitation to the next evening’s concert included a pass for myself and a guest.  I brought my younger brother, an excited fan.  It was an spellbinding performance, including all their popular songs in a large stage production with special effects. [top of page]

We were kindly included in an after concert dinner.  The French restaurant wasn’t exactly happy about entertaining the late and rowdy crowd of about fifteen.  When Roger Taylor sent the wine back as unacceptable, the waiter grumbled audibly in French and was surprised by my replying in French that his less-than-delicate remark was overheard and understood.

I sat across from Freddie Mercury and enjoyed studying his face.  With his narrow eyes, high cheek bones and prominent front teeth, he looked very much like many young men in my Persian audience at Kolbeh and Andre’s.  I also performed at several Armenian supper clubs: Michael’s, Haji Baba’s and Sayat Nova.  Like many belly dancers, I had picked up small talk in the languages of the people with whom I worked so I initiated Persian small talk with Freddie.  Impressed, he told me that although born in Zanzibar to Persian parents, he grew up in London and didn’t speak Farsi fluently (good thing since neither did I!)  Freddie asked if I’d be interested in performing with Queen the next evening (the last show of a long tour) during the encore.  As it was almost Christmas, they were planning to have several characters (dancing reindeer and gingerbread-men, Santa, etc.) and I’d fit right in!  I extended the opportunity to Jane and Denise, of my dance team from the dinner party, who were happily available.

On Dec 22, 1977, Jane, Denise and myself met at the concert venue: the Los Angeles Forum.  David Brown, Queen’s manager, carefully explained when we’d appear and how to get up on the stage, introducing us to the gentleman who would alert us to our show time then lead us to the stage.  We relaxed in our own dressing room and waited for our cue.  We could hear all the superb music and the wild response of the sold-out crowd; reviews called it one of the best concerts of the year.

As the encore began, Santa brought a large sack on stage and opened it: no, not toys, it was Freddie!

He crawled from the sack onto Santa’s shoulders and sang the iconic “We Will Rock You”.

The final song was “Sheer Heart Attack” and that was our cue!  About a dozen entertainers piled on the stage: clowns, reindeer, and ginger-bread men, while balloons and blow up dolls dropped from the sky onto the audience. 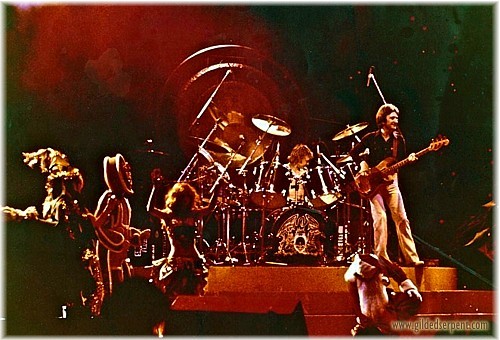 As we took to the stage the roar was deafening.  It was a thrilling experience to project to an audience of over sixteen thousand.  I extended large movements up to the people in the “nose bleed” section, and brought my focus down to the front row – where I saw someone I knew!  He was wearing my publicity T shirt, screaming and pointing at me!

After dancing around the stage parameter with the other band members, I joined Freddie front and center and we danced joyfully through the end of the song. 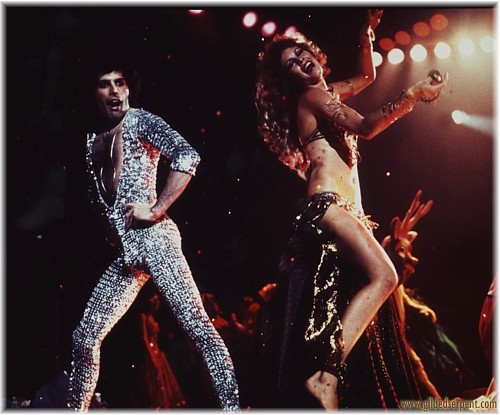 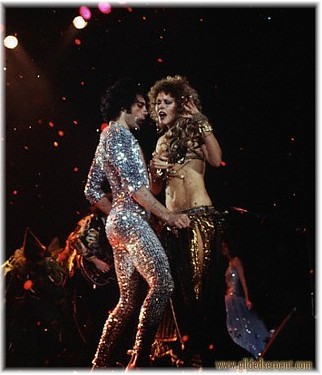 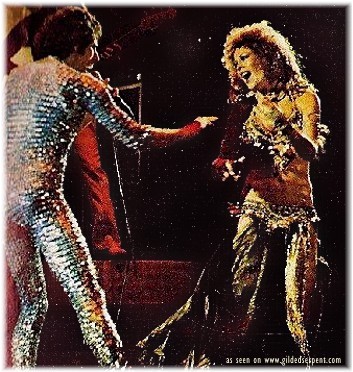 At one point I remember Freddie reaching out to grab me; all you working dancers reading this know: this is not unknown in a live dance performance!  Just like my show in a supper club: I did a back-bend flip spin, cleverly eluding his grasp while not losing a beat or my smile.  I remember the final chord lasted a long time and I began to spin.  That long last chord continued and I continued to spin, tanoura style: losing myself in the experience; this seemed to go on for quite a while!  Suddenly it occurred to me that since all the other characters had stopped yet I was still spinning I may be garnering too much attention in a show that wasn’t mine!   I stopped and bowed to the band … then acknowledged the band to the audience, just like I do at the end of my show in a supper club!

My performance space had always been intimate Middle Eastern supper clubs, weddings and private parties: where the soulful, subtle and articulate movements could be easily seen and a oneness space could be achieved and shared.  In this performance for over sixteen thousand, perhaps it was boldness to believe I could reach such a large audience.  Yet in that moment, I felt that boldness had power and magic in it. 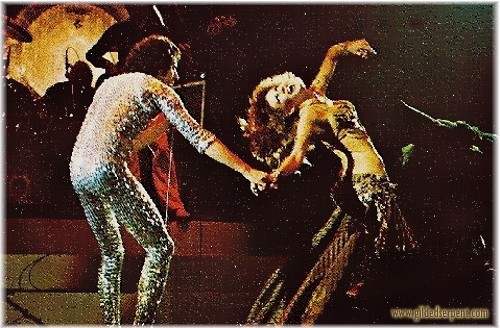 PS: We Will Rak You

My Dance Experience with Queen: 30 years later a mystery is solved!

Who knew that Gilded Serpent’s publishing of this article in November of 2010 would solve a mystery of over 30 years? At that same time, the finishing touches were being placed on an exhibit for 2011 in London commemorating the 40th anniversary of the band Queen, containing extensive art, audio files, visual files, and memorabilia. The exhibit, called “Stormtroopers in Stilettos” was scheduled to run in London February 25 until March 12 before it tours the world. No stone was left unturned to amass the most comprehensive and complete story of Queen’s early years.

What made the finding of “We Will Rak You” exciting to Nino Trovato, the Queen researcher who discovered the Gilded Serpent article then emailed me, was that the images of that evening Jane, Denise and I performed with the band during the finale are well known – and mysterious, because the dancers were uncredited. As he described it to me, these images represented the only time other performers shared their stage. Therefore, these images have become iconic – yet mysterious. The images were subsequently used in the program for the 1978 European tour.

Gary Taylor, associated with the creation of this exhibit, will be following it with a book called “Queen Live”, chronicling the entire history of Queen’s live performances. It will contain these fun images (hey is that Freddie trying to take a bite of me??) , the dancers finally known at last. 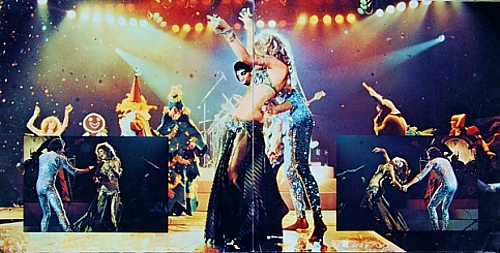