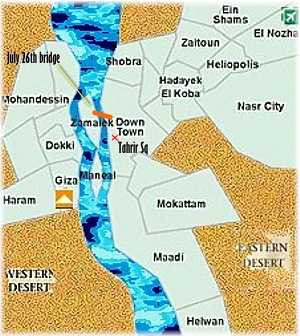 We had just finished our dance and music cruise in Aswan when news of the protests in Cairo reached us.  As everyone was leaving (the majority of the dancers went on a shuttle to Hurghada) we sat on the boat and watched the news as we waited for that evening to go back to Cairo.  Thankfully, Madam Raqia had left a few days earlier for a festival in Spain. It took us a while to realize the phones were not working.  Everyone tried calling Cairo without success so we sat glued to the television as the demonstrations unfolded.  We heard from the boat staff of demonstrations going on in Aswan and spent a few hours trying to round up the girls who had gone downtown as tourists.

They had met the protestors and either turned back to the boat or had waited them out in a closed shop with cautious business owners.

Our scheduled flight was late that night and the orchestra was to leave on the overnight train at 9pm.  We had just eaten lunch when we heard there would be a curfew in Aswan (all foreigners confined to their boat or hotel and all Egyptians to their homes) so we rushed the orchestra to the train, and we got a bus to take us to the airport so we wouldn’t miss our flight.  Our 3 year old was in Cairo with the nanny with no way to contact him. Being in Aswan, we could still receive calls, just not from Cairo, so we talked with worried friends and relatives outside of Egypt.  From what we were watching on the news and hearing from friends outside the country, we were determined to get back to Cairo that night!  The orchestra had to wait in the train station for about 4 hours for the train.  The protestors had stopped in front of the train station and the police tear gassed them to break them up.  The gas floated into the station (no one was allowed to leave) so the orchestra spent a rough time suffering from the gas.  Their train left on time, and they were pelted with rocks and bricks by the protestors as they pulled out of the station.

We got to the airport in the early evening and were issued tickets, then we waited for hours.  By 4:30 am we were back in Cairo.  The airport was a mess with people sleeping everywhere!  The curfew was in effect until 7am, but we didn’t want to wait.  We had left our car in the parking so against the advice of the police in the airport, we left.  Safaa, Azza Sherif, Tanya Eshta (our Russian language coordinator for the festival) and I piled into the car under mounds of luggage. No one stopped us from leaving the airport, but once we got out into the city, we realized that every major route into Cairo had been blocked off by the military.  We wound our way though side streets for an hour just to get to the 26th July Bridge.  We were the only car on the bridge, just us and a convoy of tanks.  We saw burned-out police vans, cars overturned, smoldering government buildings, but all was still.  We drove to Mohandaseen to drop off Azza Sherif at her flat.  She lives on the corner of S. Gamet el Dowel el Arabeya and S. Shehab.  This is the biggest shopping street in central Cairo. 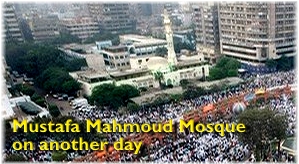 The only way we got through is that someone had overturned the barriers and pulled them away enough for a car’s width to get in.  A lone tank sat in front of Mustafa Mahmoud mosque and the bands of men and boys roamed the streets carrying sticks. This was the first time I felt scared.  Most of the shops on the main street had been looted. Some were still burning.  Bon fires still smoldered in the middle of the street and the gangs of men looked into the car window and then waved us on.  We stopped in front of madam Azza’s house and the men in the lobby came out with caution.  When they recognized Azza they helped her inside.  We said good-bye and drove on to Dokki.  All the businesses in the first of S. Mohi Adeen were gone.  Radio shack looked like a hurricane had hit it.  We were waved through more civilian guard posts and finally arrived at our house.  Interestingly, our villa falls inside the security compound of the Egyptian CIA.  We are used to the armed guards downstairs and the fact that anyone who wants to come to our house must be questioned first before a gate is opened to them.  The security guards looked haggard, and it took them ages to find someone inside who could vouch for us and open the gate.

As the sun came up, we were finally home.  Joe was fine, and he and his nanny had been holed-up inside for two days, eating what was left in the cupboard.

We woke up late in the day to find soldiers in riot gear downstairs.  The mobile phones had been turned on again (but no Internet or texting) and we sat in front of the TV watching Al Jazeera.  They were reporting that most of the important business men on the country had fled, including Gamel Mobarak.  We passed the day in front of the TV.  The next day we woke up to find our compound virtually abandoned.  Friends called to tell us to get out of there that the CIA complexes were targets; we felt like sitting ducks.  The idea of abandoning our home just didn’t feel like an option. As we didn’t have any food in the house, Safaa took the car and went to the local super market.  He called from there and said that the place was pretty picked over.  Nothing fresh was left and all the staples were almost gone.  People had stolen the carts, so he carried one bag out at a time and then went in to buy more.  He left the super market and went to the beledi market inside Dokki and found fresh vegetables, but the line for bread was long and unruly, so he decided against it.  He came back with strange foreign foods, but it was food.

We were watching the news again and Al Jazeera had been taken off the air.  The local stations were talking with the business men who supposedly fled and were in fact, still in Egypt, many very interested in the protests and protecting their families.  We went to bed listening to gun fire in the distance (we live 5 minutes from Midan Tahrir). The next morning we woke up to commotions downstairs.  Out on our street, the CIA had returned in force.  At least 150 plain-clothes men with radios and police clubs were standing in front of our villa.  They had blocked off the complex in a one block radius in all directions and brought in an armored car.  It was tense with all this security and the war planes doing fly-bys!  The noise was deafening, neighborhood kids were crying.  The day passed uneasily.

Since then, we have been staying in our house.  Things go on about as normal before the curfew.  We watch the news and visit neighbors within our three block radius.  I have been in contact with all my friends and relatives throughout the city, and all are fine.  Some are protesting against Mobarak, and some are demonstrating in Mohandaseen, defending him.

As a new Egyptian national, I am proud that people are demanding their basic human rights, and at the same time, sorry for the economic hard times that have already begun here.

People, without access to their money from the bank closures, cannot by food.  I heard this morning that the Egyptian pound fell from 5.7 to 10 pounds to the dollar.  Tourism is all but destroyed for the coming months. Egypt will survive and, hopefully, come out a stronger nation, but it will be a hard transition.  So now we wait.

I am glad that all the participants from our festival are now safely in their own countries.  It may be a while before we can have another event, so I’m thankful that the cruise went so well and people were able to get home.  Thank you to everyone who called, sent emails and messages on Facebook.   Pray for Egypt.  Ni aish leMasr, Wa Moot leMasr, Masr Masr Tahaya Masr!