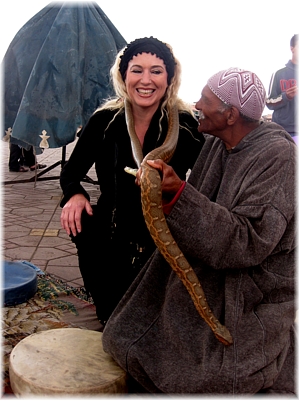 My New Festival in Marrakesh

Let’s close our eyes and imagine together that we are entering a fairy tale that covers the foothills of the snowy Atlas Mountains and of the red city Marrakesh, with a celebration of colors in which merchants, storytellers, wizards, jugglers, dancers, drummers, snake trainers, and actors join. It is surrounded by thick smoke from the dozens of food and grill stands in a square that is lit with hundreds of small lights. It is here that we come in with dance steps, and we experience, along with Simona, the Moroccan experience…

This is an event in which fantasy and reality meet, a celebration of the “Arabian Nights”; we, the festival participants, will be the main actors and join this colorful fantasy.

Why Morocco? There is something about Morocco that excites the imagination and activates the senses. It is Maroc (Arabic word meaning Morocco), and more. Morocco is a country of contrasts where everything, both fantasy and reality, blends together in a spectacular way. Bordered by the Mediterranean Sea in the north, the Atlantic Ocean in the west, Algeria in the east, and the Western Sahara in the south, it is a wild landscape of the snow-capped Atlas Mountains that blends in with the desert.

Ancient Berber tribes and Jews began to populate the area 2,500 years ago! Later, Phoenicians, Romans, and Byzantines populated the area.  In the 7th century the Arabs conquerors arrived to Morocco, bringing with them the religion of Islam along with the Spanish and French.

There is a mixture of faces in one region. There are so many different cultures that live in harmony –in the same place– that it is difficult to remain indifferent. 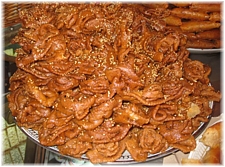 Moroccan cuisine ranges from spicy to sweet, cold to hot, and dry to juicy.  There are artistic motifs representing the East and the West.

Marrakesh is the beating heart of Morocco!

Marrakesh, the historical and cultural capital of Morocco, is a city bustling with life from six in the morning until four in the morning of the next day!

Marrakesh (also known as the “red city") is named for the characteristic red-earth color of its buildings; it has been defined by UNESCO as a World Heritage Site since 1985. The city attracts many tourists every year, and it has been nick-named the "Paris of Morocco", thanks to its many architectural gems. The Old City is known for its alleyways and colorful markets. (For example: Djemaa El Fna Square where life is a carnival that opens early in the morning with the arrival of the fruit dealers and sellers of water, vegetables, and amulets; then the square turns to a market.) Slowly, the carnival develops: women paint on the body with henna, and snake trainers do their magic–all to the sounds of the drummers in the bands. 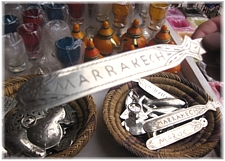 During the evening, a dramatic change takes place again, but after midnight? The residents of Marrakesh arrive to watch exorcism ceremonies! 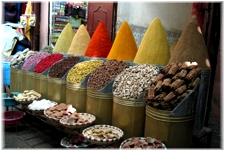 In Marrakesh, time seems to stand still. Yes, Morocco (in general) and Marrakesh (in particular) do stimulate the senses. In the “Mediterranean Delight Festival”, we will celebrate and capture time standing still, as well as the senses and the vivid colors, odors, flavors, sights, and music.

What is the connection between Morocco and me?  I grew up on my father’s exotic stories about Morocco (his homeland), and I absorbed the heady scents of the Moroccan dishes. My imagination saw the country as it was told to me, and I experienced through my senses.

Maroc is a place that is a stage on which:

All of you, my friends, and you, the readers, are invited to join my fantasy that is turning to reality–a Bellydance festival–a Mediterranean delights festival! So, I hope you will come and taste all of it.

About the festival I produce and my passion behind it:
It will be a once-in-a-lifetime experience! This unique festival combines the colors and scents of Marrakesh, Morocco, with its Bellydance aromas: new with old, aromatic blend of colors, sounds, odors, and tastes. The festival lasts six days at the “Ryad Mogador Agdal”, a Moroccan style hotel that represents the place I dreamed about: where we may experience its ethnic culture and the place in which the décor is Moroccan in all its glory.

Festival attendees can be introduced to the diverse local folklore as well as participate in Bellydance workshops (held by the best teachers from around the world). A contest with amazing prizes will be held. One can dance to the sound of the live bands at parties until dawn, warm up with the heat and love of the local people, taste the local cuisine at ethnic restaurants, and take a tour of this dazzling city. You can open your mind to people from different places and enjoy an international experience. All can enter this fairytale world through the portal of “The Arabian Nights Festival”, an experience that will shake the body and mind.