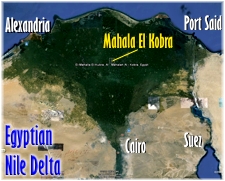 In an Egyptian Village

The Moulid is one of the many Egyptian ceremonies I enjoyed last June in the small village of Nemraa El Bassal, in the Mahala El Kobra region of the Egyptian delta. Although it is a religious ceremony, for Egyptians, it is another excuse to dance!

A Moulid is a traditional street festival that is rich in rituals and customs. The direct translation of El Moulid is “the birth”; however, the term is used to refer to the birth of a much loved and respected holy man, a sheikh, who died sometime ago. A Moulid is held near the ornate stone mausoleum in which he is buried.

When I arrived, all of the main streets in the village were already full of people, and there were people selling candies and sweets as well as toys. There were mechanical fair-rides, and most importantly, there was free food, dancing, and singing. Kids come to the Moulid dressed in nice new clothes. Everywhere, they are playing and eating their favourite foods–like hummus (roasted chick peas) and halawa (sweets). 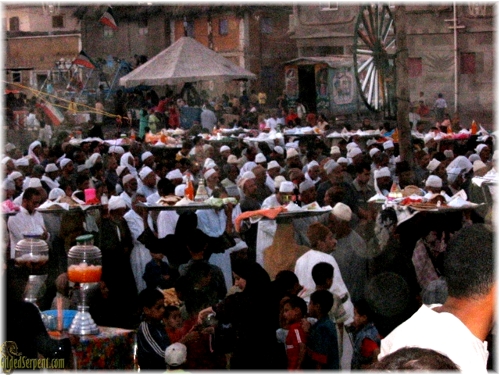 Every family of the village and surrounding area have brought a big fancy meal, served in beautiful china for the people of the village. Around 3 in the afternoon, all the women met in a big circle in the centre of the village, each with a circular aluminium tray full of food. Looking around, I was amazed (but not surprised) that every single tray has the exact same type of fancy china, since I am Egyptian, I know that this china is to be used only for the Moulid. Inside of the circle of food-bearing women, I could hear the men praying El Assr’ (the afternoon prayer). The women waited for the men to finish, then all the men and the women, the old and the young, the rich and the poor, sat together (without differences) and ate the great meal.

After the feast, the traditional Sai’eet (story teller), who could be a man or a woman, started telling stories accompanied by a full traditional orchestra. The entire village enjoyed stories about life, love, religion, and wisdom. Throughout history, the Sai’eet has been the educator, entertainer, and critic of life.

In times past, the most exciting thing at the Moulid were the Ghawazie. They were professional dancers who travelled from Moulid to Moulid for a living, like the Gypsies did in Europe. People would come from miles away (and wait all night) just to see their gold coin-covered costumes and sensational dancing. They danced to live music with th eir wide hips swinging from side to side as if they were proud of every part of their bodies.

It was still early, yet the men were getting exited by the music, beginning to whirl around in a large circle. Supposedly, due to the mystical effect of the power of the Moulid, they enter into a holy trance, whirling and swinging their bodies in different movements. One can hear them chanting the words “Allah haaiy!” This special dance is called a Zikir. The direct translation of the word Zikir is “mentioning”, which refers to mentioning God. Allah haaiy! means “God is alive!”

Around 3 in the morning, the Moulid was still going strong. On the other hand, I have been living in Canada for too long, and it was time for bed! Although my soul wanted me to stay and play, I got into my sister’s car and started out on the first part of our trip back to Cairo. 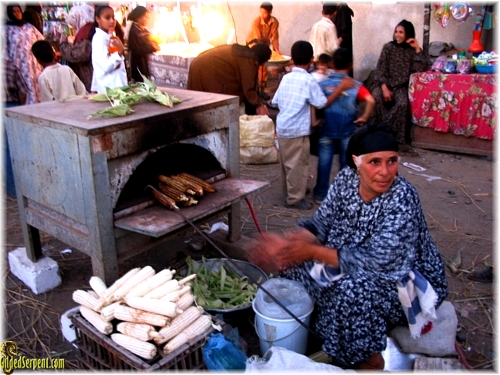