Dance divas, have you ever thought about what would happen by default to your expensive and wonderful costumes and props once you go to “the after-life?” Have you kept track of your hip scarves, props, and skirts? Do you have a “diva in waiting” who could step up and take care of your treasured items? If you have not, now is the time to setup a record keeping system for your costumes and designate someone to manage or delegate your collection.

Here is a good example of what can happen when you don’t make plans for your possessions when you join the after life:

One of the grand dames of Belly dancing, Marliza Pons, passed away here in Las Vegas on May 2, 2011. She had been in the dance business for over 40 years. As you might image, she had millions of items stored from her career as a dancer and teacher! I remember once visiting her at her storage unit, and I can tell she had at least 5 rooms of costumes, fringes, swords, hats, masks, skirts, pictures, and you name it. You could tell that some of the items had never been used! There were boxes and boxes of things; it was like a Christmas vault for a Belly dancer! Marliza did not leave a will, and her family had no idea of what she had, where any of it was or what to do with it.

When she passed away, her son had no clue concerning what to do with her belongings. He didn’t know what she had or what the items were worth monetarily or historically. His solution was just to throw everything out! Can you image how much of her precious history would have been lost? I don’t know if it was due to fate or fortune, but a dear friend of Marliza’s,  Rossah, stepped in and saved her legacy from the dumpsters…

When I spoke with Rossah, she said it was a enormous task to organizing everything since Marliza had not done it for herself and no one in her family knew anything about her collection. Rossah said she spent a great deal of time going through 40 years of Belly dancing items. She said that she came home after work for weeks and would stay up until 11 p.m. every night, sorting through all of it. She said there was enough there to warrant opening a small store! Rossah is had an estate sale on Marliza’s behalf, July 30, 2011.  The proceeds of the sale will go to pay for Marliza’s memorial.

It would have been a true tragedy to lose these items that are rich in dance history and were priceless to Marliza.

Do you really want your Uncle Earl to use your scimitar as a fishing pole or Aunt Martha using you hip scarves as table cloths?  As in my case, one of my snakes might become somebody’s belt! You really need to think and plan what you want to do with those costumes for which you worked hard. You don’t want someone to come along and think it is just junk and trash it.

The other issue is that it is not fair to have someone sort through your things with no idea what is what. Furthermore, they may not understand the intrinsic value of your things (in addition to their sentimental value to you) and with no guidance or assistance from you, some (if not all) could be lost.

I have an aunt who has been after me for years to document and organize my costumes, props, and animals.  However, now I have, and let me tell you it is a lot of work and an on-going process each time I buy something new like costumes, scarves, comic books, or a snake. I have a spread-sheet for my snakes, Belly dance costumes, clown costumes, puppets, comics, etc. (You get the idea.) I update my spread-sheets quite often because I seem to be a “shopaholic”.

Painting for sale of Marliza

My main concern is for my animals! I have some that will out-live me, and therefore, I really have had to plan for them. Keep in mind that there are bird sanctuaries and other groups that will help you plan for your pets. Also, I have made sure that my designated representative knows with whom (or not) to re-home them, I had a room mate who commented that he would make a belt out of one of my snakes if something happen to me, so he gets nothing! How many snakes do you know that come along with a trust fund? Well, my Seiti does! He is my pride and joy, so I have to take care of his future.

If you are like me, you have worked hard for your things. I would like to see mine to go to someone who will appreciate them as much as I do. Does anyone want a pair a female clown shoes? There are many programs you can download or purchase to setup a record of your precious treasures. 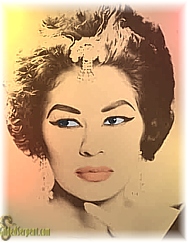 This brings me to another important point that I noticed have happened with Marliza Pons: there doesn’t seem to be any footage saved of her dancing. As of this date, nothing has been found. The family has no idea if there is any footage or where it would be. What an unfortunate thing to happen to someone who dedicated her life to this Belly dance art.

Definitely, I would recommend that you get a video of yourself dancing, if you not have already done so. It doesn’t matter if you are at a show or at home. My wonderful agent had me put up several videos of myself on YouTube, and we have a few practice sessions committed to video as well. He wanted to make certain that there is a record of my performance in existance somewhere. Also, we have made several copies and there are videos on my face book page, as well as my website. Definitely, you will want a record of your fabulous time as a dancer and such records can help with putting things into perspective for those you have left behind.