Last weekend, I was fortunate enough to attend the sold-out Dangerous Beauties Show held at the Dark Room Theater in the heart of the Mission District of San Francisco.  This collective of dancers is the brain child of Surreyya Hada and Nyla Crystal, whose mission is to bring to the dance stage pieces that explore the essence of the femme fatal.

The entire production was moody, dark and intense; just the way a Dangerous Beauty would like it.

The headline for the show was the Princess Farhana of Hollywood, who was in town to teach a workshop the next day. She was stunning in two pieces. In the first piece, “Pipedreams and Poppies” she transformed herself into a heady opiate vision of alluring destruction. A wispy grey veil floated around her body like smoke that swirled and enveloped her torso, framing her supple body movements and mesmerizing us viewers.

In her second piece, The Princess recreated her role as “Lousie Brooks,” one of the first Hollywood actresses to be labeled a femme fatale. She looked breathtakingly nude in a sheer mesh dress with strategically placed sequin, bead and rhinestone patterns. A pair of electric blue peacock feather fans played about her body, a non-strip tease of conceal and reveal. At the climax of her show, the audience gasped for breath, as she lifted her face from the floor, revealing striking eyes painted onto the palms of her hands, winking seductively and flirting with the audience with four eyes.

There were many more outstanding performances.  Tatseena of Dublin, CA. was a vision of terror as Medusa with her deeply earthy style and her sinuously supple partner, her snake.   Although her mask popped off a bit early, there was no mistaking exactly who she was portraying… Fortunately, she didn’t actually turn us to stone!

Surreyya (as the Sphynx) presented a double sword piece. She stalked out onto the stage and literally pulled a pair of swords from inside her costume–an absolute surprise to me, and I still wonder where they were stashed inside her bedlah.

Terry (as Cleopatra) was absolutely stunning.  I’ve seen her dance many times and she continues to be one of my favorites.  However, in this show, she brought an evocative intensity that was at once queenly and seductive, and I must add, I really thought she was smoking hot in her costume!

Adrianna (as Sita), an Indian goddess, came out in a gorgeous sari-fusion costume and evoked the spice and flavor of India in an improvisation to live music.  She transformed her high-energy, glamorous style into a deeply intense Indian-inspired taxim in which she was able to showcase her stunningly supple arms and hands.

There were many more lovely dancers with interesting and entertaining pieces, but these whom I have written about are the ones that stand out in my mind as show-stoppers.

Overall the quality of this dance concert was quite high and embraced diversity in its cast, with dancers of many different ages, sizes, styles, and experience levels, showing all at a high state of accomplishment in their craft.  I would have liked some of the dancers to embody their characters a bit more fully, for although the dances were all lovely, at times, I had to look to my program to see who they were portraying.

The Dark Room Theater was intimate and was standing-room only.  The lighting was, at times, so dark and moody that the dancer seemed to disappear into the backdrop.  As is frequently the case in live theater, there were a few unfortunate snags and glitches.  At times, we could see directly into the dressing room through the curtain located behind the stage; it was a large bright triangle that stood out against the black.  Sadly, this opening allowed an occasional glimpse at an upcoming performer, dissipating some of our anticipation and surprise.

Personally, I would have wished for the performers to have had a longer “tech-check”, and perhaps, work with the lighting engineer a bit longer to perfect the show.  Some of the lighting choices did enhance the performance, but some were downright distracting from the performer. The use of the red gel was quite heavy-handed.  Nonetheless, as is the case with many venues, there just isn’t enough time before a show for everyone to run through all the pieces.

With luck, this collective of fine dancers will have the opportunity to perform again – and when they do, go see them!   Well, that is, if you can face the danger… 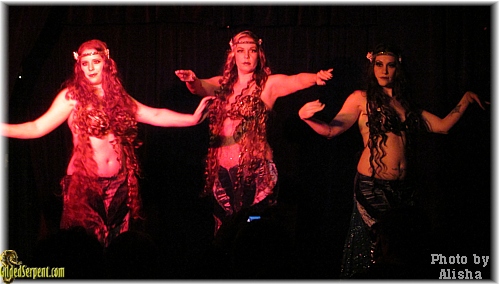 More photos from this show by Brad Dosland