On Screen and Off

Lets face it, many belly dancers love, collect and quite possibly are addicted to the magical cloth from Egypt, Assiut.  Over the years, dancers have performed in assiut dresses, have worn shawls and scarves artfully draped, tucked and twisted into their costumes, and covered bedlah sets with this distinctive cloth.  It has a look that is both exotic and unique, the metal embroidery on mesh ground cloth providing a rich luster and sheen, draping and conforming to every contour of the body.

Throughout the history of motion pictures, the costume designers of Hollywood, and the stars they dress, have had their own love affair with this gorgeous cloth.  Assiut fabric was used initially to breathe life into an ancient past and later to provide a connective link to the 20’s when the popularity of assiut was at it’s zenith.

One of the first of these epics is the 1916 DW Griffith masterpiece, Intolerance, which featured costumes made from assiut in the Babylonian and Egyptian scenes.  By using fabrics actually from Egypt, although totally modern in construction and design, the film evoked the exotic otherness of a an imaginary and timeless Middle East.

Intolerance – DW Griffith Masterpiece of 1916 –
You can see in this film still assiut cloth draped over the the shoulder of an actress in the far left bottom corner.

Throughout the early days of film, when assiut cloth represented the luxury of travel and a mythologized east, it became symbolic of an educated, well traveled bohemian lifestyle.  From the start of the British Occupation of Egypt in the 1880’s to the peak of assiut collecting fervor in the 1920’s, starlets off screen would collect assiut shawls to wear as elegant accessories or even as garments themselves. 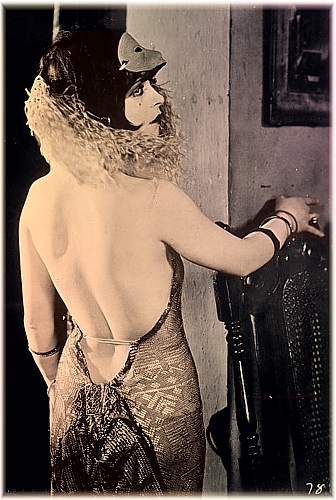 Clara Bow Hollywood’s "it girl" wearing an assiut shawl transformed into a glamorous dress held together by some discreet stitching and a pair of strategically placed cords.  Off screen, assiut shawls appear in publicity stills and on informal photographs. In a time of exotic masquerade themed parties, costumes were made from anything laying around, and assiut were popular to work into revealing costumes.  Here, Clara Bow has captured the center front of a rectangular shawl at her neck with an unseen cord, and wrapped the fabric to the back, creating a pleated, almost bustle-like drape in the back.

For the sword and sandal cinema classic, Sampson and Delilah (Paramount,1949,) award winning Hollywood costume designer and courtier to the stars, Edith Head was called upon to design a collection of alluring costumes for the legendary femme fatale.  One of these ensembles was the amazing two-piece ensemble cut on the bias to further emphasize the contours and curves of the gorgeous actress. For this, and the other costumes worn by Hedy Lamarr in her title role as Delilah, Edith Head went won the academy award for best costumes in 1951. 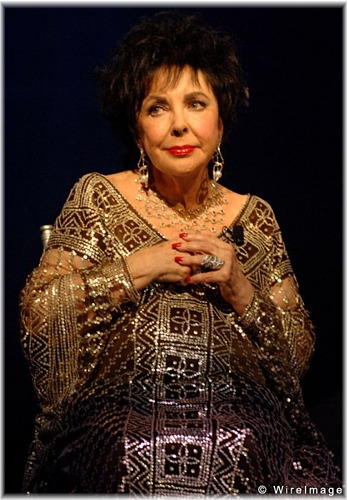 Elizabeth Taylor 2007 – Maintaining a stylishly subtle connection to Egypt and her hallmark roll of Cleopatra by donning a lovely assiut robe. Though no assiut was used in the production of costumes for the film, Cleopatra, Taylor collected quite a few examples of the hallmark cloth from Egypt and wore them at public appearances in her later years.

In the past few years, period movies have begun using assiut not to reference the ancient Near East and North Africa, but to echo the last century.  The popularity of assiut cloth during the teens and twenties – especially by bohemian travelers and performing actors have lead designers to incorporate vintage cloth for a period, and appropriate touch.  In this image, Aryiel Harman wears assiut shrug in her roll as a Coochie Girl in the movie Water for Elephants costume design by Jacqueline West.  The designer really did her research, using the cloth to reinforce the subtle connection that exists between assiut and dance

Most recently, Tom Cruise was spotted wearing a vintage assiut scarf for his staring role in the film Rock of Ages.  For Tom’s role as Stacee Jaxx, costume designer Rita Ryack channeled the style of ’80’s rocker Axl Rose.  The look is spot on, and Ryack completely captured the "I raided grandma’s attic" look that was de rigueur for the rockers of the time.

Hollywood’s costume designers, and the actresses they clothe, will continue to grace the motion picture world with quick glimpses of this amazing cloth.  Next time you’re at the theater, keep your eyes peeled!
Have you seen a movie clip or still featuring a piece of assiut?   Why not let us know in the comment section below!