The Search for El Dorado…in Cairo

The name “El Dorado” conjures up images of a fruitless quest for an unattainable, even mythical, goal.  The El Dorado in this discussion, however, is neither myth nor fantasy.  El Dorado was a sala or café chantant, an entertainment hall, located in the heart of Cairo’s Ezbekiyah entertainment district.  Among the performers to grace its stage was the legendary Shafiqah el Qibtiyyah, a pioneer (and some say originator) of raqs shamadan.  Careful examination of primary sources, combined with explorations in Cairo, has shed new light on El Dorado, its precise location in Cairo, and its significance in the evolution of what we know today as raqs sharqi.

Establishments like El Dorado were the forerunners of the salat and casinos of the early twentieth century; they established a performance format that was elaborated upon by Badia Masabni and her contemporaries.

El Dorado turns up several times in contemporary travelers’ accounts and guidebooks as a place to witness Egyptian music and dance.  The sala was in existence as early as 1870 (Académie Royale des Sciences, des Lettres et des Beaux-Arts de Belgique 1870) and remained in operation until at least the 1910s (Molony 1917: 39, Sladen 1911: 114-115).  Where was El Dorado?  The first edition of Karl Baedeker’s Egypt, Handbook for Travellers (sic) reveals substantive details regarding the exact location:

“The following are Cafés Chantants, where Bohemian musicians and singers perform in the evening: …Café Egyptien, opposite Shepheard’s Hotel; Eldorado, in the narrow street at the back of the Hotel d’Orient (but about to be removed to the Ezbekîyeh).” (Baedeker 1878: 229)

click graphic for enlargement
Postcard showing Midan al Khazindar around the beginning of the 20th century.  The Sednaoui Department Store building now stands on the site
formerly occupied by the Liverpool Hotel (formerly the palace of Nubar Pasha, later the Hotel Khedivial).
This card is from my personal collection.

By 1885, the date of publication of Baedeker’s second edition, El Dorado had moved to “the Ezbekiyah” (Shari’ Wagh el Birket):

“The following are Cafés Chantants, where Bohemian musicians and singers perform in the evening: Café Egyptien, opposite Shepheard’s Hotel; Eldorado, in the Ezbekîyeh.” (Baedeker 1885)

According to Sadgrove, the Società Filarmonica-Drammatica l’Aurora, an Italian amateur theater company, rented the El Dorado’s old location at the end of the 1870s, but that building was destroyed by fire in 1880.  Based on Baedeker’s 1878 mention of plans to relocate El Dorado, it seems likely that the move was undertaken before the fire took place.  Subsequent editions of Baedeker’s guide book offer a detailed description of El Dorado’s new location:

Many of the existing nineteenth century buildings on Shari’ Naguib el Rihani have first-floor arcades (i.e. covered walkways fronted by colonnades), but it remains unclear which of these vestiges of Cairo’s belle époque housed the relocated El Dorado. 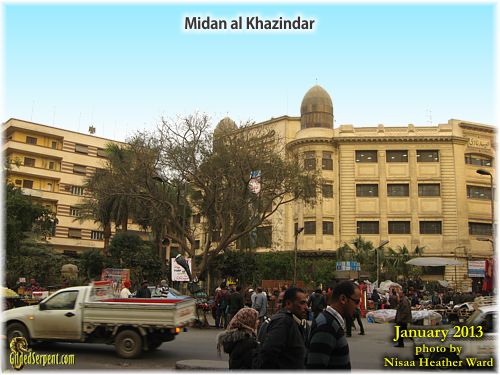 Photo of Midan al Khazindar (taken by me in January 2013).  The large building on the right is the Sednaoui Department Store building.
The governmental building to the left of Sednaoui replaced the building that housed the Bristol Hotel (formerly Hotel d’Orient).
The original location of El Dorado would have been near this spot. 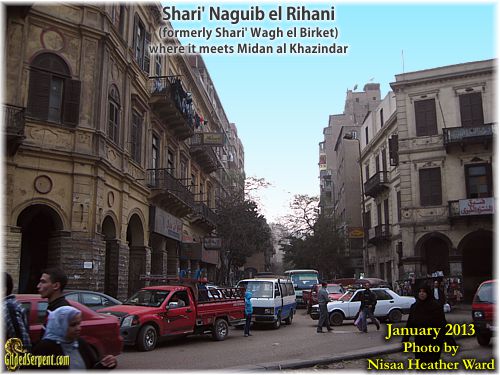 Photo of Shari’ Naguib el Rihani (formerly Shari’ Wagh el Birket) where it meets Midan al Khazindar
(taken by me in January 2013).
El Dorado was relocated to this street sometime around 1880.

As I have discussed elsewhere (Ward 2013), entertainment halls (salat) were widespread in Ezbekiyah by the end of the nineteenth century.   These establishments offered a broad range of entertainment, including music, dance, theatrical productions, gambling, and more.  Like other salat of the time, the El Dorado offered variety entertainment.  However, the program appears to have changed over the course of the venue’s existence.  In 1870, when El Dorado was still located behind the Hotel d’Orient, the venue featured performances of European music – such as the waltzes of Strauss and the works of Offenbach (Académie Royale des Sciences, des Lettres et des Beaux-Arts de Belgique 1870: 51).  After the move to Shari’ Wagh el Birket, dancers, singers, and acrobats were on the bill, and gambling was also available to patrons (The Queenslander 27 February 1886, 336).  Were those singers and dancers European or Egyptian?  This is not clear from the Queenslander article, though it is evident that Egyptian singers and dancers were performing there by the 1890s (Baedeker 1898: 24, Reynolds-Ball 1898: 12).  Theatrical performances, probably European operettas, were also on the bill in 1888 (Al Ahram 1 December 1888, 2).  By 1910, the primary entertainment at El Dorado was Egyptian singing and dancing, though Loewenbach’s account of a visit to the sala in 1907 indicates that motion pictures were shown on a cinematograph there (Loewenbach 1908: 220).

A common contention regarding raqs sharqi is that it was created or invented by Badia Masabni in her Cairo night clubs.  However, as I have argued elsewhere (Ward 2013), the elements of what would become raqs sharqi were in place at venues like El Dorado well before Badia opened her first club in 1926.

The late nineteenth century sala provided a new performance context for native Egyptian music and dance.  As a space devoted to performance for the sake of performance – as opposed to performance in the context of a traditional social occasion such as a wedding or moulid (saint’s day festival). The sala became the incubator for the transformation of Egyptian belly dance into a formal theatrical dance form (Ward 2013).  At salat like El Dorado, customers paid an entry fee to see Egyptian musicians and dancers perform; this was a profound shift from the past, when dance was not the “main event” but rather was rooted in a social occasion.  These venues established a precedent that would enable Badia’s success with her own salat beginning in the late 1920s.

This is not to diminish Badia’s contribution to the stylistic development of raqs sharqi, since it is likely that the dancing performed at El Dorado and other salat before Badia’s time bore little resemblance to the raqs sharqi of today.  Although it is difficult to discern precisely what belly dance looked like at the end of the nineteenth century, firsthand descriptions of dance performances at the time, including a description of a show at El Dorado (Loewenbach 1908: 218-220), suggest that the performers danced in a style akin to the ghawazee of today: with a focus on hip articulation, minimal traveling, and sagat playing de rigeur.  Clearly, Badia’s innovations in movement, staging, and costuming and their subsequent influence on the evolution of raqs sharqi are undeniable.

Another oft-repeated assertion about raqs sharqi goes as follows: raqs sharqi, the theatrical form of belly dance that we know today, came about because night club owners (especially Badia Masabni) deliberately Westernized the traditional dances of the awalem and ghawazee in order to make Egyptian dancing more palatable to European and American visitors.  However, Loewenbach specifically states that during his visit to El Dorado in 1907, the audience was almost entirely Egyptian (Loewenbach 1908: 218).  He also suggests that foreigners were charged a higher entry fee (ibid.).

Although salat such as El Dorado were cast in the mold of European music halls, it would be a mistake to assume that these establishments were geared toward a European clientele.

This point was reinforced in an interview with Sayed Henkesh, in which he indicated that the audiences at later salat and casinos, such as Badia Masabni’s and Safiya Helmi’s, were primarily Arab, and that the only non-Arabs in the audience were expatriates residing in Cairo, not tourists (Sayed Henkesh, personal communication, 2013).

In fact, some of the greatest entertainers in Egypt, including some who would eventually make their mark in the Egyptian recording and cinema industries, worked at El Dorado.  These individuals were popular among Egyptian audiences, but virtually unknown to Westerners, a clear indication that the venue catered to Egyptian tastes.  Shafiqah el Qibtiyyah (Shafiqah the Copt), a widely popular turn-of-the-century almeh, and according to popular lore, originator of raqs shamadan, performed on El Dorado’s stage.  A 1955 article from El Kawakeb magazine mentions that multiple establishments were competing for Shafiqah, but it was El Dorado that was lucky enough to secure a contract with her.  The singer and actress Munirah al Mahdiyyah also appeared at El Dorado.  Munirah al Mahdiyyah was one of the most renowned female singers in Egypt until the rise of Um Kulthum in the late 1920s.  Munirah began her singing career in Cairo at the small café of Mohammed Farag; she eventually made the move to El Dorado, where her fame and popularity increased substantially (Al Hifni 2001: 86-87).  Musician and composer Dawud Hosni established his popularity with the taqtuqah (light songs) he composed for performers at El Dorado (Fahmy 2007: 211).

El Dorado offers a tantalizing glimpse into the world of Egyptian entertainment at the turn of the nineteenth and twentieth centuries.  Salat like El Dorado, with their varied programs incorporating music, dance, theater, and more, set the precedent for future Egyptian entertainment venues.  The “variety show” format established in the salat of the late nineteenth century would be perfected and surpassed in success by the better-known salat of the late 1920s through the 1950s, such as Badia Masabni’s Casino Opera.  Within this context, belly dance as professional entertainment transformed from its traditional origins in weddings and saint’s day celebrations to its new role as a theatrical performance art – one performance art among many in the diverse line-ups of the salat of Cairo and Alexandria.  As research continues and a more complete picture of venues like El Dorado materializes, our knowledge regarding the origins and development of raqs sharqi can move from the realm of hearsay and speculation to the world of verifiable fact. 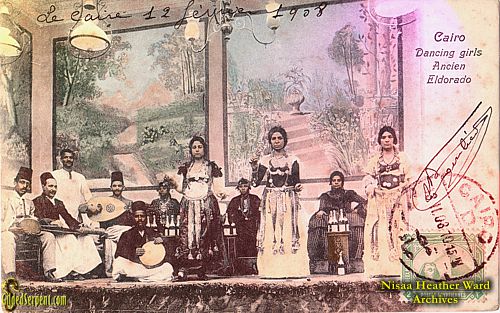 click graphic for enlargement
Lichtenstern and Harari postcard showing dancers, singers, and musicians on the stage of El Dorado.
The card is postmarked 1908.  This card is from my personal collection. 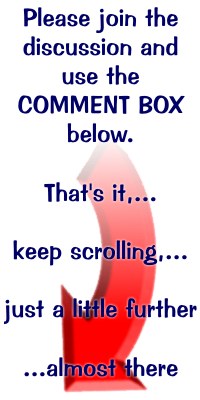