From Evolution to Revolution

A Review of “Dark Side of the Crown”

Finally the day came; Bellydance Evolution opened the Miami Bellydance Convention 2013 at the Colony Theater, in Miami Beach. I sat down with Alicia from BellyCraft and our whole conversation was about how excited we were for the show. I didn’t have a clue of what I was going to see and what to expect from a show that recently added 12 cast members from an online competition. Suddenly the lights were turned down and I soon realize that the audience was infected with the same enthusiasm that Alicia and I had. Almost everyone in the audience was a dancer; something very rare these days, since the dancers are usually backstage, and the audience is full of family members that most of the time tend to be annoyingly quiet.

“Dark Side of the Crown” is an ahistorical story that could be defined even as a fairy tale. In a faraway Kingdom with a matriarchal political system, Queen Rahyan (Heather Aued), was celebrating the ceremony where she will pass her crown to one of her three daughters, played by Louchia, Sharon Kihara and Kaeshi. Suddenly in the middle of this celebration, the Queen is mysteriously assassinated. The intrigue of the show is driven by the question of who murdered the Queen. Until the assassin gets solved, Jillina (advisor to the queen), is chosen by the character, Priestess Elaleh (Zoe Jakes), to rule.

Jillina’s character is mean and abusive which makes us think that she may be the killer!

The first act started with a very busy and colorful entrance. I was impressed with how many dancers were on stage, when one of the most memorable scenes took place: the assassination of Queen Rahyan. The lighting and sound work very well for creating a thriller scene. Zoe Jakes was the guest artist and she interpreted Priestess Elaleh. Zoe Jakes oneiric image and her eternal pauses created a mystical atmosphere every time she was on stage. Her use of different props, such as feather fans and the Tunisian jar were very effective with her Priestess character. But that spiritual aura is a distinctive of Zoe. In the case of Jillina that we probably think of as a “happy dancer” it was very interesting to see her as the villain. Her body language was very clear and readable. In this show Jillina executes and master different styles of dancing, such as Hip Hop and Tribal. Sharon Kihara (Princess) and Kaeshi (Princess) are also known for doing fusion. These two artists even though they have a notorious height difference, their facial similarities and dance styles work to manifest their sisterhood in the story. Louchia provided a contrast and her elegant Oriental technique projected freshness. Some of the princesses’ choreographies had compilations of moves that were the perfect boundary between Tribal and Oriental Dance. It is visually interesting to see how the show plays with these two styles. For certain choreographies establishing the exact definition of the styles is difficult, sometimes Oriental is used to fill the stage and Tribal become more narrative in terms of the story. 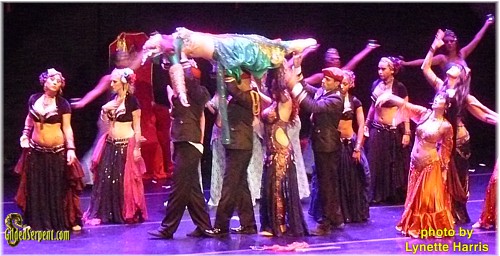 Assassination of the Queen.
Photo at top of page- Louchia and Danielo Mendes

The incorporation of two male Hip Hop dancers to play the imperial guards not only add diversity, but make “Dark Side of the Crown” a great fusion show. DanieIo Mendes (Imperial Guard) ability for physical comedy is a great asset for the story. Heather, as the Queen was the most outstanding character of the show. Her performance was a great combination of good acting and soulful dancing. She has a telepathy with the audience that makes us experience her character’s intimacy. Her Egyptian technique was very well combined with her lyrical and modern dance training. Her hips were clear and heavy and her footwork was as light as her spiritual character. Her solo with classical Chinese sleeves is one of the most powerful pieces of the show.

The ending of the first act was hilarious, a fantastic fusion piece. Ozzy Ashkenazi, Pete List and Brad Macdonald played an interested composition that combined military marching beat, Hip Hop and Middle Eastern rhythms. The sound was perfect and the synchronization of the three musicians was outstanding.

The costumes were a mix of glamour and military fashion. The female dancers were wearing a beret with fancy gloves and a “typical” belly dance costume. Because Hip Hop is a genre usually dominated by male figures, and Belly Dance so attached to the concept of femininity, the dialogue between these two art forms was very effective. The glamorous army costume makes me consider how avant guard these two dance styles are in reality.

Most of the music of “Dark Side of the Crown” is composed by Paul Dilenter. The show includes “Enta Omri” a piece by Oum Koulthoum and a Shaabi Egyptian song.

The use of these two songs took away the suspense created by Dilenter’s music. The social associations eliminated the sense of fantasy especially when it comes to tarab. For a more educated audience in Middle Eastern music will be difficult to connect the profoundness of “Enta Omri” with a fiction story.

In the second act we follow the imperial guards in their investigation of the murder. However during the process of interrogating the Queen’s daughters, it is difficult to follow the story and to understand the characters. Even at the end, when we realize who the killer is, it still is a little confusing to understand the motives of the characters. The show starts to lose some coherence in the second act. However the dancing and rhythm of the show keep us entertained at all times.

In a literary aspect the story or the concepts of “Queen” and “Princess” are not something new. The structure and ending is typical of the fairy tale genre. But a fairy tale “can be describe as fable that teaches an important moral” and I think “Dark Side of the Crown” may seem like is missing that key message. For being such a great production in terms of technique, lighting and music they lost the opportunity to tell a story never heard. Like the great playwriter Bertolt Brecht said, “Art is not a mirror held up to reality but a hammer with which to shape it.”

The show finished and an entire theater full of dancers stood up to give a well -deserved standing ovation to this amazing cast of artists. The winners from the BDE Online Competition did an incredible job and they look like an entire ballet that has been training for years. The challenging part about Theater Dance is that you need to have a full artistic formation.The competitors need it to prepare and understand their characters in function with the story. They have an important role in the show because they established the context and the energy of the scene.The repertoire of choreographies require dancers well trained in Oriental dance and in acting. No wonder why so many outstanding dancers like Yvonne Pereira (Florida), Camilia (Poland) and Paula Saneoux (Dominican Republic) have decided to do it and a couple of them have done it more than once. It’s the perfect symbiotic relationship between the show and the dancers. As a spectator you can feel the excitement of the competitors and the show nurtures itself with it.

“Dark Side of the Crown” is making a revolution and I was happy to witness this new chapter of our art form. The discipline, the dedication and the audacity that require doing a production like this one makes me think that Bellydance Evolution is probably making the pathway to get to Broadway.

Zoe as priestess with Paula behind.