A Carousel of Challenges

Bellydancing at the County Fair

Ah! The smell of buttered popcorn, the blare of ‘80s rock in roll, the burning sensation of your watering eyes; it must be county fair time again!  Every year, county fairs, large and small, occur, attracting millions of people across the United States to enjoy a day of good ol’ fashioned fun. For many belly dancers, the county fair is their only reliable performance venue. Always unpredictable, sometimes entertaining, they can be a good place to learn the ropes of belly dancing for the general public. Performing at county fairs requires certain skills and the venue is not for everybody, but I recommend dancing in the fairs–as long as you bring along your antihistamine.

To perform at a county fair requires forethought and tenacity. Often, you must contact a fair representative at least a year in advance to have your name and address placed on an email list for an application.

Using correct terminology is important; belly dancers are community performers who are requesting to perform on a community stage.

No, this is not a paid performance, but it is not unusual to receive applications six months prior to the county fair. At this point, you must look at your crystal ball and decide if you will be available. Some county and state fairs have byzantine application forms that require you to choose from a variety of days and times as well as supply the signatures of all potential participants. If you are accepted, you will be issued a time slot and free passes.  From my experience, fair organizers want to know in advance if you need to cancel, and sometimes, you will be required to return the passes you were given. I know of a large urban county fair that will blackball you if you do not cancel within whatever is deemed an appropriate time frame. At all times, remember that the fair’s representative is most likely a volunteer, so be patient!  Once you have performed, you will be on their email list, and you will be contacted automatically for the next year. Always respond, even if you are not interested, and tell them to keep you on their list. If you do not do this, you will have to start the process over again. 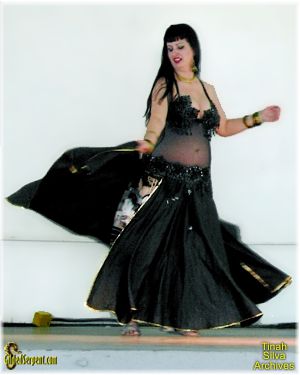 On the day of your county fair performance, I recommend highly that you bring a print copy of any emails or forms that indicate you are scheduled to perform. Once again, you will be dealing with volunteers who have no idea who or why you are there! I expect to go through a rigmarole to gain entrance to the fair as a matter of course. Arrive at least an hour prior to your designated time slot. Expect to walk (sometimes a great distance), expect dust and dirt, and assume the worst. This is where patience, and often, the ability to improvise are important. I have arrived at fairs to discover the so-called stage is merely a grassy spot beneath a tree. Unfortunately, the absence of a sound system is common. If you ask “What do I do for dance music?” I have been told, “Don’t belly dancers play those clacker thingies?” Good point! Yes we do. At that point, you can either do an acapella routine or fetch your boom box from the car. Community stage presentations can vary from karate demonstrations to local church choirs, and I have found that officials of fairs have no idea what these types of acts need to present a good exhibition, and sadly, sometimes they do not care.  About this time, you begin wonder why you are doing this.

When you see your proposed dressing area, try not to cry. I have dressed in my car, random unoccupied offices, porta-potties, plastic pop-up tents, and (my all-time favorite) a tool shed. Needless to say, I try to wear most of my costume into the fair, fearing the dressing room dilemma. To add to it all, fairs are held in the summertime. Trying to dress and apply makeup in a tool shed in 100 degree weather should qualify you for sainthood, but wait, there is more! If you have a sound system, you should count your lucky stars!  I always have my boom box in the car along with batteries–just in case. The “sound guy” is a volunteer or your husband or maybe yourself. There really is no graceful way to segue from fiddling with your boom box to sashaying onstage to dance, so just do it with a smile!

During your performance, you will have to work to attract and keep an audience. Community stages can be located next to livestock or even inside noisy carnival ride zones. I have performed on stages next to mechanical bull rides, robotic dinosaurs, and racing pigs. It is not unusual to be unable to hear your music over the sound of wild carnival rides. There is nothing like vamping through a dramatic veil routine only to have the roar of a robotic T-Rex disrupt the mood. Worse yet is to realize that your performance coincidences and competes with frantic pig racing commentary. At one point during every fair, I just have to laugh!

Audience members can add to the surreal atmosphere. Remember, they serve alcohol at many fairs. I have dealt with hooting drunks, angry women, proselytizing people, dancing drunks, and sticky children. I have never had a problem that I could not diffuse, but I do recommend taking somebody along with you–especially if you are performing at night. What makes these performances worth it to me is the fact that I am performing for people who may never have seen a belly dancer. For every drunk I have had to dodge there have been far more people who have enjoyed my show, asking questions, and taking my business cards. Rachel Brice tells a story of seeing a belly dancer at a fair and being inspired to try belly dance. You represent the art of bellydancing, so be mindful of that.

Always bring a positive, flexible, and open attitude. I am a cabaret belly dancer who has worn folkloric costuming because the fair wanted a “family-oriented” presentation. I was not offended. Having volunteers joke about belly dance and realizing they think you’re a stripper is not unusual. I find the best tactic is to perform, not lecture.

The general public really, really does not know what belly dance is. Show them!

As summer approaches, I am gearing up to once again to belly dance through county fairs until the first chill of fall.   Shows held in fairgrounds are not glamorous but are always entertaining, and they are an important venue for promoting belly dance to the general public. Just don’t forget that the most important thing in your gig bag will be patience, and the ability to improvise. 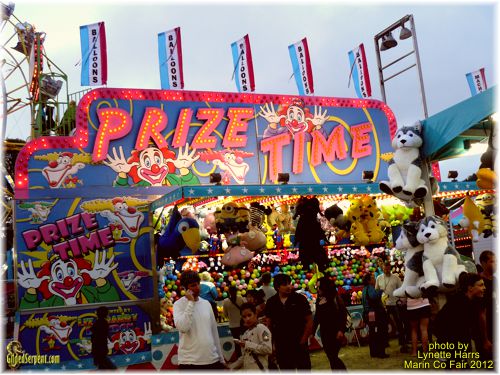