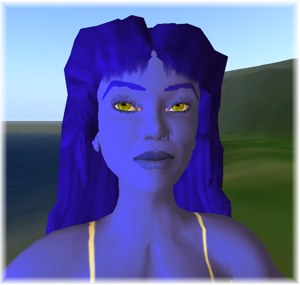 What does it mean to incorporate a culturally significant practice from one society, not into another culture or social tradition, but rather into an imagined, fantasized and idealized world?  This is one of the questions I will be discussing during my talk “Digitizing Raqs Sharqi” during the International Bellydance Conference of Canada in April.  I have been conducting some virtual fieldwork, looking at Belly dance in Second Life, an online game created managed by Linden Labs of Seattle, Washington.

“Virtual fieldwork” is fieldwork in a digital setting; for example, looking at online magazines, message boards, social networking and video sharing websites to learn about what people do there and why.  It also includes looking at multi-player online games such as Second Life, where people from around the globe can interact in a simulated online world.

When the issue of Belly dance in Second Life first arose in one of the research interviews I was conducting for my PhD, which is about the international dance community and the globalization of Belly dance, I was intrigued.  Through my interviews I had learned just how much the Internet has changed the way dancers interact with one another in the past nineteen years, reflecting the way it has radically changed the way people communicate and interact with one another more generally in that time.  However, it had not occurred to me that people would turn to an online game to dance, an activity that (until then) I thought of as something that couldn’t be done digitally.  Though my research on the ways dancers communicate online took a different direction for my PhD thesis, I remained interested in this phenomenon.

In Second Life, the dancing is done digitally by applying a computer program that causes one’s avatar, the digital representation of the self online, to move in a prescribed manner.  Instead of learning movements and needing time to practice them, they are loaded onto the avatar just like Nero learns Kung Fu in the “Matrix” films.

When a particular bit of code is applied to the avatar, it does exactly the same thing every single time.  Though Second Life users are free to walk around, run and even fly in the game, when they run these bits of computer code that are known as “animations”, the users are not directly controlling the movements of their characters using a joystick or a prerecorded video animation; rather, the code itself causes their avatar to move in a certain way.  There are several ways Second Life users can access these pieces of code, such as buying an animation that the avatar can then carry about, or clicking on a button within the game that causes an animation to take place within a particular area. I will speak more about this at the IBCC.  I will also be looking at what it means to perform dance and to learn to dance in a non-physical realm compared to the way we learn and teach others about dance in the real world.

I am especially interested in the community aspect of dance in Second Life—real life Belly dancers are often connected with a community that meets at local, national and international events like the IBCC, as well as communicating online in listservs, by reading one another’s blogs, and looking at videos of each other on YouTube.  Is the Second Life Belly dance community a part of the global Belly dance community, or is it something else? I will be comparing how dancers connect online in other venues (blogs, online dance magazines like Gilded Serpent and on YouTube) with how Second Life dancers interact with one another and whether there is overlap between these communities.

For an idea of what Second Life Belly dance looks like, have a look at the videos below, also available through my research YouTube channel, www.youtube.com/caitietube under “Playlists:  Second Life and Motion Capture Belly Dancing”.

Gilded Serpent readers who want to get in touch and share their personal experiences with belly dancing in Second Life can reach me at cm268@exeter.ac.uk.  You can also find me on Second Life under the name Zarafa Merryman.

If you haven’t yet tried it but want to, head over to www.secondlife.com to download the software.  Joining Second Life is free, but there are some activities which cost money in the game, like buying costumes.  Once you sign up there are tutorials to take you through creating an avatar, and special spaces for "newbies"–new players in the game–where you can ask for help and learn how to do various things.  Once you’ve gotten past the initial ‘culture shock’ and are used to being in the game, to look for like-minded dancers, join groups like "Bellydancers" and "Serenity Belly Dance."  Club Habibi, the Belly Dance Room in the Sultan’s Oasis Club, and Zadi’s Dance Club are popular dance venues.  Or try visiting Virtual Morocco and Virtual Egypt.  I look forward to meeting many of you in April if not in Second Life before then.

Have a comment? Use or comment section at the bottom of this page orSend us a letter!
Check the "Letters to the Editor" for other possible viewpoints!