Mawheba: A Journey Toward Teaching Dance

Notes from an Interview with Dandesh 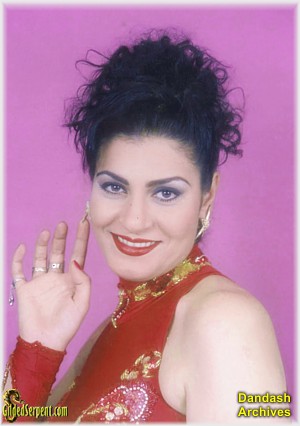 In Egypt you often hear people saying that the best dancers originate from Alexandria and Dandash is no exception. Born into a family of performers she was destined for fame. She also had a variety of influences over the years which helped create the unique style of the one and only Dandash!

Dandash’s parents performed as a singing duo on the radio in Alexandria as well as in weddings and parties.

From the tender age of seven Dandash was already an accomplished dancer and would accompany her parents and started to perform professionally.

The mesmerized guests would exclaim “how could someone so young dance like that! She must go on to be famous! ” . When I asked Dandash if she had been formally trained she replied that Allah had given her “mawheba”, that is a gift of talent from above. She added that she had seen Naima Akef on television and had fallen in love with her. Another influencing factor on her style was her love of ballet. She did not study ballet but would imitate the moves and dance around in her home as a child. At this point in the interview Dandash jumps up to demonstrate. With her arms raised and elegant execution of pirouettes on demi-pointe I am reminded of a music box dancer. She also demonstrates how she incorporated ballet leg lifts into raqs sharqi. 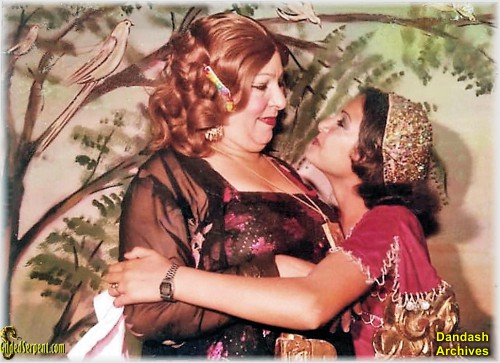 Dandash at 8 years of age with her mother

I was curious as to what a performer of such a young age would wear on stage and she replied that she had many “thobes” (dresses) of all colours. They were modest and covered her chest although some were also short and often with matching sequined headbands.

She further surprised me by informing me that she actually made the costumes herself. Then to add to her talents she relayed that she also sang alongside her blind sister Noura. Noura was older than her, sixteen at the time and still sings for Dandash and other dancers to this day.

I asked her about her education and whilst she attended school right up until finishing level she admitted that she would day dream about dance in the classroom. Her favourite subject was Arabic which is not surprising for an artist who interprets the song meanings with her actions and movements.

The family became well known and was asked to attend various celebrations in the countryside outside of Alexandria. They travelled to cities such as Mansoura and Sonbat. Here Dandash saw for the first time performances by the Ghawazee of Sonbat and also Awalim who had travelled from Cairo to perform in weddings. These distinct styles were quite different from what she had seen on television and in Alexandria. She even incorporated a few moves she had seen which helped to mold her unique style and made her stand out later in Cairo.

Dandash’s star shone bright and she quickly rose to become the number one dancer in Alexandria. She performed in all the 5 star hotels such as Cecil Hotel, San Giovani as well as weddings and parties. She also began working in “masraheyat” stage musicals. So even though she was well loved in Alexandria the public realized that it would be a shame for her to stay and that she really needed to go to the centre of Raqs Sharqi, that is Cairo.

On left is Dandash at the age of 17 performing at the Cecil Hotel Alexandria. She and Azza Sherif were the first Egyptian stars to have badlas made from leather.
Azza Sherif had the identical design only in black. On right is Dandash performing in Cairo with her sister Noura who is singing.

Once she finished high school, she married a musician who played keyboard for her and they left for Cairo. From the second day she arrived in Cairo she was working in nearly every venue. She changed costume designers from Hagga Torkeya who was in Alexandria, to the renowned Sahar Okasha amongst others. She also immediately started work as an actress on television as well as dancing in haflas that were also televised on channels such as Orbit and Nile TV. Within two years of the move she had become a superstar in Egypt.

I asked Dandash what was her most memorable moment in her dance career and her face lit up as she recalled one special night that stood out from all others. She was performing at the famous Cave de Roi nightspot and in walked none other than world famous Egyptian actor Omar Sherif with his entourage. Suddenly she felt herself putting her best foot forward and dancing stronger than ever before because she knew that he was watching her. She had seen his films as a child and had been in love with him since that time. She was overjoyed that night and believes that it was her best show ever. During her set she stopped her band and motioned for the microphone. She then asked Omar Sherif if she may greet him and he replied if he could greet her in return. He then took the mike and announced to all that “If I don’t see Dandash dance, I don’t see the Pyramids”. At which point Dandash burst into tears. The whole event was published in the gossip columns of the papers the very next day.

With the increase in exposure also came the interest of foreign students to study with her. Dandash started teaching private students from her home (including myself). This was also around the time that the festivals started on home ground in Egypt. Dandash performed at the opening gala of Ahlan wa Sahlan in the Ramses Hilton in 2002. She stole the show with a tableau (also known as the manga routine) depicting dancers of the past: Souheir Zaki, Sami Gamal, Naima Akef, Taheya Karioka, Nagua Fouad, Fifi Abdou, Sahar Hamdi and Dina. Incredibly Souheir Zaki was in attendance and hugged her after her show because she was so thrilled. Here is the same tableau performed on TV:

The next year she also started to teach at Ahlan wa Sahlan. Dandash knows that her technique is difficult to grasp and humbly admits that she struggled with teaching in the beginning. Even Dina made the comment to Dandash “ the best thing about you is that your style is different and difficult. There is no way that any bellydancer can copy you”. There were not only language barriers to overcome but understanding how to teach her unique style which would take time. She went on to teach and perform in various festivals such as the Nile Group, Raks of Course and Camp Negum as well as abroad in Japan, USA, England, France, Germany, Italy, Sweden, Mexico, Ecuador and Greece. She has now spent the past four years working on herself and her teaching methods. She feels much more confidant as a teacher and this is one of the reasons behind why she has finally decided to create her own festival in Cairo. (See “resources” below)

Before I leave, Dandash proudly tells me one recent moment in her life that also had her in tears. Whilst in Japan recently she was taken to the “National Museum of Ethnology” in Osaka, for a “surprise”. As she wandered through the various rooms she had no idea what was in store for her. As she rounded the corner leading to the section devoted to Middle Eastern arts she was amazed to find her very own badla on display and a video screen of her dancing being broadcast. She was the only raqs sharqi dancer to be honoured in the museum.

Dandash performing in Alexandria
2 unlabeled photos above-
Left: Dandash in red dress in a role in the television series “Hotline”
Right: Dandesh in a “masraheya” with Ahmed el Saka.

Have a comment? Use or comment section at the bottom of this page or Send us a letter!
Check the “Letters to the Editor” for other possible viewpoints!