1st Annual Shimmy in the City

How I Organized an International Festival and Survived (just!)

Our headline star was stuck in Cairo, her visa refused. Another star’s visa had arrived after his flight had left; now he had to come by a different route and would arrive a day late, at the wrong airport, at two in the morning! A star costumier had a similar visa problem and had had to pull out completely.

I suppose that if we had really thought about the date of our first-ever Shimmy in the City, which took place on 25 September 2011, it might have occurred to us that it would be very close to the tenth anniversary of 9/11, but I’m not sure we would have considered that the anniversary might have a direct impact on our bellydance festival. I can’t say for sure that heightened security between Arab nations and the UK was directly responsible for the problems our stars had. In all the years I’ve been arranging international bellydance events I’ve never had so many problems getting dancers into the UK. I’m a Government Registered Sponsor and had arranged work permits for everyone, so I had thought it was a done deal, but not so! The British Embassy in Cairo was clearly on high alert and was undertaking far more stringent and time-consuming steps with all Egyptian residents applying for visas, which I think accounted for the difficulties we had.

There’s no doubt that organizing a major international bellydance festival was one of the most challenging, stressful and nerve-wracking things I have ever done. It was also more satisfying, joyful and life affirming than I could ever have hoped! The main reason for that? My festival partner, Khaled Mahmoud.

If I were writing this article as a handy checklist for people thinking of putting on a major bellydance event, item number one would definitely be get yourself a partner you trust, and who has an unerring ability to make you laugh.

Hope to goodness you manage to stay friends right through to the end! Which, despite all our challenges, thankfully we did!

Shimmy in the City was conceived as an intimate festival, with a small number of top-line stars, held in one of the most vibrant and exciting cities on earth – London. We hoped that the combination of major superstars and an iconic city would prove an irresistible draw. And so it was. We had participants come from every corner of the globe – from Russia, New Zealand, Japan, US, Scandinavia and all over Europe, east and west.

But that in itself brought challenges. For example, we hadn’t realized that many eastern Europeans still don’t have credit cards, and for them, payment in advance was a real problem. The Siberian dancer who won the male competition arrived with an unreadable music disc. Thank goodness there was another Russian in the room with a PC that could read it! 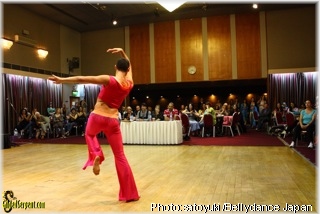 Our major challenge was undoubtedly the fact that Soraia Zaied (the wonderful Brazilian dancer who has been resident in Cairo for many years) was refused a visa on the day before she was meant to fly out to us! Soraia had unfortunately made a mistake on her written visa application and, despite the fact that I had already arranged her work permit, the authorities had refused her entry to the UK. It’s every event organizer’s worst nightmare and I remember exactly where I was standing when I took the call from Khaled and just how sick and scared I felt hearing the devastating news.

Thankfully Khaled is an international star with an address book to die for! We allowed ourselves two minutes of panicking and then he got straight onto the phone to Asmahan, another fabulous South American star with a worldwide following.

He literally woke her up at 5am, asked for her help and she immediately dropped everything and got straight on a plane to London! What a star indeed!

It was a nerve-wracking time on the first day of the festival, waiting to hear whether Asmahan had been allowed into the country to save our skins. I had been up since 5.30 am, doing a radio interview, and when I got the call from Khaled at 8.30 to say they were on the motorway with Asmahan in the car, the relief was enormous. I will never quite get over the incredible generosity of spirit that Asmahan demonstrated in dashing across the Atlantic to help out a friend. So, at last everything was in place and the festival could swing into action! [Ed note- Also, Asmahan had just arrived home from Japan the evening before!]

Dancers arrived from around the globe, full of excitement and anticipation. The souk vendors unpacked their fabulous wares and our team of volunteer helpers arrived to greet people and direct them to the various rooms in our venue. It certainly was a great venue! Theatre, ballroom, rehearsal studio and several conference rooms under one roof, and only 15 minutes by train from both central London and London Gatwick airport. It’s where I teach my weekly classes and one of the things that made our life so much easier was the fact that the venue staff all know me and worked really hard to make everything run smoothly.

On Friday we ran an international competition with competitors from around the globe: from Japan to Siberia, Europe to the US. It included what we think was possibly the first-ever international male bellydancer competition and the standard was extremely high throughout. It was followed by a hafla with a truly international vibe, set in the venue’s glittering chandelier-lit ballroom. I have magical memories of that night: the bright faces of dancers of multiple nationalities dancing together, their language differences of no consequence; of Tito in jeans and t-shirt dancing a tabla solo with Khaled drumming for him, and of some fabulous bopping from our stars.

Oh my goodness, what stars! I’ve left them until last because they were really what made everything so special. Having top quality stars makes an event organizer’s life so much easier. When you have stars of the quality and professionalism of Jillina, Tito, Asmahan and young fusion star, Anasma you can be sure your workshops will not only fill up very quickly, but that your delegates will leave buzzing with joy and excitement. Khaled and I taught too, even though it wasn’t easy combining teaching with organizing and performing!

The workshops were full, the teaching excellent. The show on Saturday evening was cheered to the rafters, from Wael Mansour’s opening tannoura, through Khaled’s glittering showcase, Jillina’s incredible three sets, Tito’s jaw dropping stick and drum solos, Anasma’s amazing theatrical pieces and of course Asmahan’s show-stopping finale. The look of joy on audience members’ faces was unforgettable and I felt truly honoured to be part of such a stellar lineup.

We all celebrated on Sunday night with a trip by red London double decker bus to an Arabic nightclub where Tito and Asmahan generously performed and the rest of us boogied until 1am.

Check out the clip of Tito dancing on the top deck of the bus!

The response and the buzz from delegates made all the hard work truly worthwhile. Despite the fact that we had lost a major star, the goodwill was remarkable! We had so many positive messages in the days afterwards and people left with armfuls of our leaflets for the next one.

Ah yes, the next one! A festival organizer’s job is never done and before the festival had even started we had already booked our stars for 2012. When you are working with big names you have to book everything at least 18 months in advance and this year we have the biggest – Dina! Indeed, as I write this (in early January 2012) Khaled has just flown out to Cairo to book our stars for September 2013, I have the venue contract for 2013 on my desk ready to be signed and the September 2012 website is ready to go live. Bring it on!